Ya'll need to forget about those itty, bitty snake-proof boots and find yourself a full snake-proof SUIT... AND HAT!!!

The ranch where this big rattler was killed is outside the city of Coleman which is located in (West Texas) near Abilene. Oh, for reference, the guy stands 6'-2". Seems there's been a boom in the snake population there. 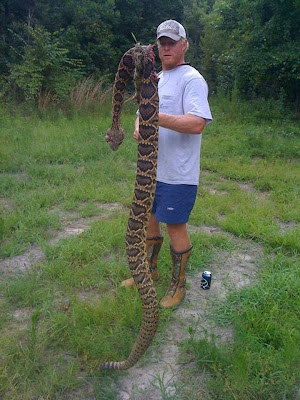 My fellow friends and family...
We have killed 57 rattlesnakes on two separate ranches this year. 24 @South bend and 33 @ Murray, since mid May. Not one has buzzed! We provoked one fair sized boy with a stick and he coiled and struck at the stick a couple of times before he buzzed up and rattled. The purpose of this explanation is that I have been hearing the same from fellow ranchers and hunters in regards to the lack of warning with rattlesnakes.

I had lunch with a friend today and he offered a theory about the fact that these bugs aren't rattling anymore. He raised pigs for years and reported that when he would hear a rattlesnake buzzing in the sow pen, the sows would bee line to it and fight over the snake. For the uninformed, pigs love to eat rattlesnakes. Therefore, the theory is they are ceasing to rattle to avoid detection, since there are plenty of pigs roaming the countryside. I have a neighbor ranching lady who was bitten 3 weeks ago 2 times by the same snake without any warning....she spent 5 days in ICU, after 22 vials of anti-venom she is back at the ranch and still may lose her foot or worse yet her lower leg.

The days of perceived warning are over. Keep your boots on and use a light when out and about. As you all know, one can pop up just about anywhere! You may wish to let your friends know about this that would be interested.

Holy cow that is some serious snake. I've seen some huge rattlers but this one beats'em all. Should feed a few people. I love all snakes... grilled.

Alive or dead I am glad that isn't me standing next to that thing. ;)

Thanks for the insight. We need to shoot more wild pigs!!!