The ex-cheerleader, (age 19), in the picture below was watching a road that led to a NATO military base when she observed a man digging by the road. She acquired the target, and she shot him. Turned out, he was a bomb maker for the Taliban and he was burying an “IED” that was to be detonated when a U.S. patrol walked by 30 minutes later. It would have certainly killed and wounded several soldiers.

The interesting fact of this story is the shot was measured at….725 yards, or a distance over the length of seven (7) football fields. She shot him as he was bent over burying the bomb. The shot struck him in the butt throwing him into the bomb which detonated. He was blown to pieces.
The Marine Corps made a motivational poster of her. Her name is “Kimmy.” 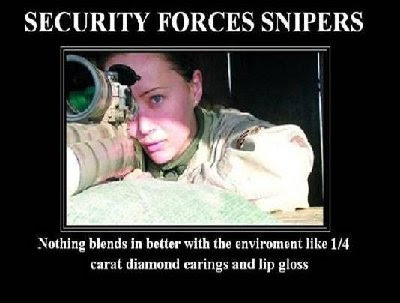 Please...say a prayer for all our brave, young, and courageous men and women who are holding “steadfast,” that line which keeps us safe and keeps us FREE! ~Marian ~
Posted by Marian Ann Love at 8:49 AM

The last line of that post gave me chill bumps, I swear. That is a great post and we all need to be thankful for our brave women and men that protect our freedom. I can't even put into words how much I appreciate their service to this great country. God bless them all. Kimmy is a true hero!

An outstanding young woman. She can take my back any time.

I'm wishing for a permanent R&R for all of our service members that are in harms way today.

get a rush limbaugh email address

check out our blog and forum