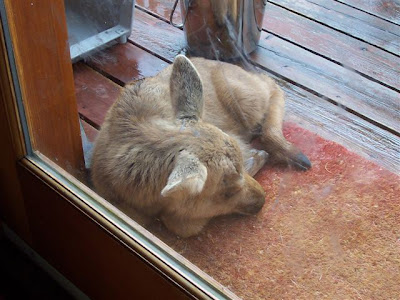 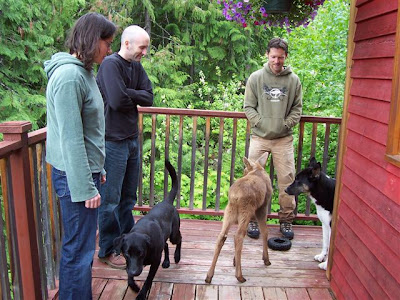 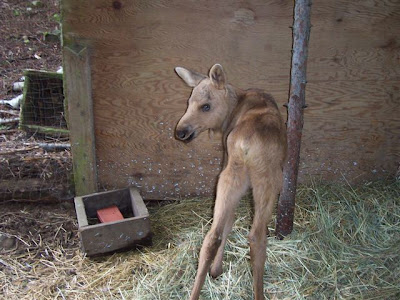 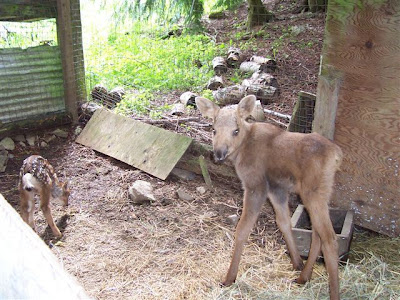 How  about a collective "aaaaaaaaaaawwwwwwwwwwww"
Posted by Marian Ann Love at 9:51 AM 5 comments:

You don't see a baby moose every day.  A baby moose was in distress in a creek.  A man got him out of the creek; tried to find the mother and send him on his way, but eventually the moose stumbled back into the creek and was rescued again. The baby moose followed  the man home.  The man has only a small cabin so he took the moose to another neighbor, who took these photos.  They took the moose the next day...To be continued! 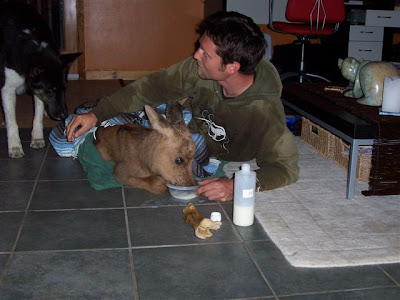 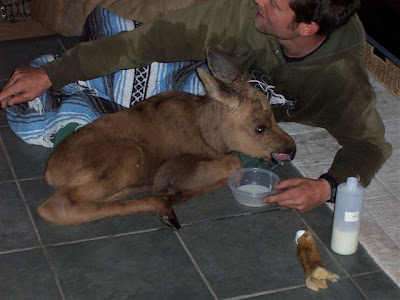 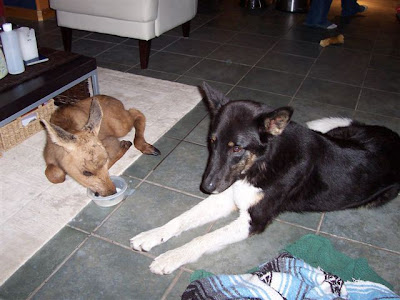 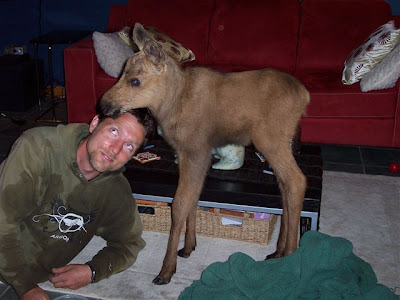 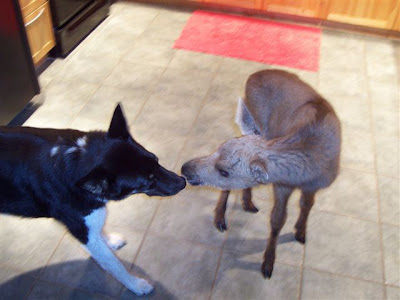 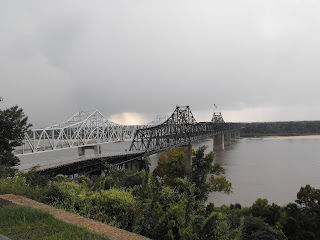 So glad to be back home from the hospital and the nursing home. I will continue with home health until my foot is completely healed from the strep cellulitis resulting from an insect bite.  I feel like I have lost a whole month of my life.  My sincere thanks to all who wished me a speedy recovery.  It really meant a lot to me.
Posted by Marian Ann Love at 3:54 PM 2 comments: 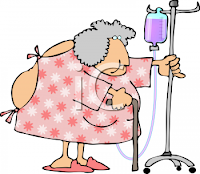 This post is to let my Blogger/Facebook friends know that I will be absent for awhile from posting. Approximately two weeks ago, I got bitten by a spider and ended up in the ER for treatment twice, plus Doctors' visits.  It looks like I will have to be hospitalized now to get my right leg to heal.  Hopefully, will be back up and running again soon. Until then...
Posted by Marian Ann Love at 5:25 PM 9 comments:

According to The Vicksburg Post yesterday, the excavation of burial remains of a partial skeleton in a vacant lot at the north end of Monroe Street ended Thursday afternoon when digging turned up no additional bones, Warren County Corner Doug Huskey said.
The bones, found less than 24 hours earlier, were determined to be human and appeared to have been part of a body that had been properly buried many years ago, perhaps during the Civil War, and anthropologist with the MS Crime Lab said.
"It's Vicksburg, so it wouldn't surprise me if it was from that era," said Lynee Boackle, who oversaw the digging and sifted through soil removed from the grave site Thursday morning.
Boackle said the burial appeared to be isolated and a search for additional graves in the area was not warranted.
Huskey said the bones were too old and brittle to be age-tested.  He and deputy coroner Ronald C. Reagan, who conducted a preliminary examination shortly after they were found by a nearby homeowner, planned to turn them over to Vicksburg official for burial at Cedar Hill Cemetery.
"There's no way of knowing what happened to the rest," Huskey said of the partial skeleton.  "It's been there a long time."
The leg bones, including femurs, knees, lower leg bones and ankles, were found by Pam McFerrin who with her husband, Elvin McFerrin, owns the nearby Governor McNutt House and a building that housed the former Children's House Montessori school.
McFerrin enjoys looking for artifacts such as mini balls and pottery shards in areas near her historic home and was digging in the vacant log just north of her property when she noticed the bones, which might have been partially uncovered by recent rains.
The site was disturbed in 2010 by heavy equipment when the city order the demolition of a derelict home on the property.
"You never know what you are going to find when you start digging round here," she said.  In their courtyard, the McFerrins have uncovered large pieces of granite, shaped for some unknown use, as well as pottery and other artifacts.
Also, a Louisiana soldier killed during the Siege of Vicksburg in 1863 is buried and has a headstone in the courtyard at the McNutt House, which was built in 1826 and is listed on the National Register of Historic Places. 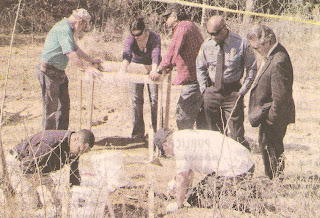 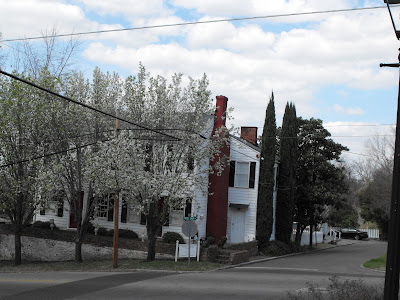 Governor McNutt House is listed on the National Historic Register. 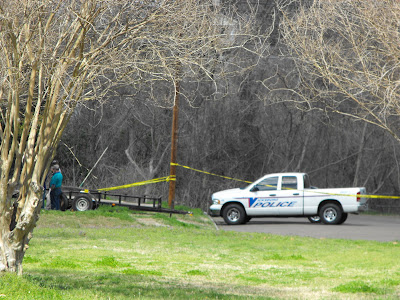 Before I could get in the front door of Governor McNutt's house Wednesday night for our monthly PAK, Omega Chapter sorority meeting, we were greeted by one of the hostesses telling us not to worry about the police being on the backside of the property.  She said her niece (Pam McFerrin) and her husband (Elvin) own the property and around 6:15 they summons the police because Pam had uncovered the bones up to both knees before Elvin advised her to stop and call the police.  He said he calls his wife an aspiring anthropologist.  They have owned the property for about a year and half and a derelict home that stood there was torn down by the city last year.  A driveway and steps down to the former home site remain.  Elvin said the skeleton's site is next to, not under, where the home stood.  County Corner Doug Huskey said that Civil War-era bones have been found in the area during his four-plus years, but never a complete skeleton.  It is not forensic, it's not a crime scene, he said.  "It appears to be an old burial.  A lot of people did use to bury the dead in their yards."  Leg bones up to the knees had been uncovered yesterday morning, and it was not clear if a complete skeleton would be found.  An anthropologist from the MS Crime Lab will determine its age and direct its removal.  It was a very interesting meeting and we were also entertained by a magician!
Posted by Marian Ann Love at 12:27 PM 6 comments: 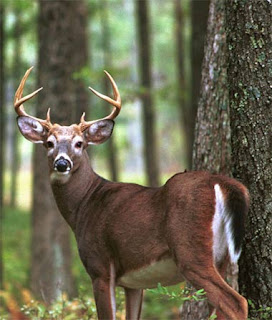 I was humbled last week after receiving an email from, Ed Overton, of Engineering Degree Online of an article that he posted on his site called, Bringing Home a Buck: The Top 50 Deer Hunting Blogs.   My hunting blog was one of the 50 sites included.  I was also happy to see that some of my favorite hunting blogs were in the "TOP 50" such as:  Whitetail Deer, Hunting Life, Deer Camp Blog, Whitetail Woods, Long Ridge Deer Camp, Outdoors With Othmar Vohringer, Women's Hunting Journal, The Hunter's Wife and Deer Passion.  Ed has recently written articles on - Building for the Future: The Top 35 Green Architecture Bloggers, Top 49 Meteorology Blogs and Top 50 Archaeologist Bloggers.  Please go by and check out his site because it is very informative.  Many thanks to Ed Overton, for putting me in the same category as the hunting blogs shown above and for all the other hunting blogs not mentioned here.
Posted by Marian Ann Love at 11:50 AM 6 comments:


This young man sings the National Anthem prior to a college basketball game. Notice two of the players in tears.  Maybe he should do next year's Super Bowl!

This is a very interesting video...and I do not recall it being taught in school.  Never knew a rifle like this ever existed.
Posted by Marian Ann Love at 3:32 PM 3 comments:

Marian Ann Love
Vicksburg, MS, United States
I am 80 years young and live high on the bluffs of a historic civil war town of Vicksburg, MS. I was born and raised here and attended St. Francis Xavier Academy, graduating in the Class of 1959. I started my government career at the Vicksburg District, USACE. I retired from the U.S. Army Corps of Engineers, Waterways Experiment Station (now ERDC) with 25 years of service in September '95. I'm a proud mother of 4 daughters, 6 granddaughters, 3 grandsons, 5 great-grandsons. I have been deer hunting for 36 years now. In the last 5 years killed two wild hogs, with one weighing 180lbs. I always look forward to hunting season in our great Mississippi outdoors!