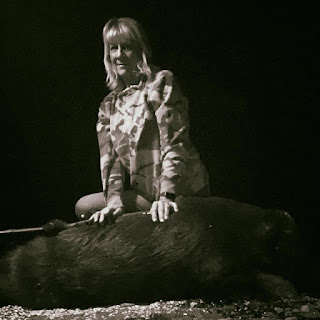 My Facebook friend, aka, "Hog Queen" of Alpine, TX, telling her story about her hunt that did not go well two days ago, but the experience paid off in her own words.

So this is what happened last night. I was out by 7:11 p.m. The usual javelinas and deer came in. About 9:15 p.m. I could hear the hogs coming. Grunting and squealing so the javelinas ran off and in came the sounder, the one with the spotted hog in it that I would like to kill. Of course, the bigger ones were at the back and I was hoping they would make their way to the front where I could have a shot at one. The feeding frenzy was in full force what with smaller hogs getting thrown around etc. All of a sudden one hog spooked and then the rest of them did too and just like that, they were gone. I waited for a while and could hear them outside the pen but then there was silence so they were not coming back any time soon or probably not at all for the night. I was mad at myself for being greedy because that is what I was, greedy. I won't make that mistake again and no, they did not smell me, because the wind was barely blowing but was blowing towards me. Oh well, when I got out of the blind I looked up and the stars were so beautiful so it was not a total loss for me. Y'all have a great day!

Comment by Dwayne:  I would not call it greed. Waiting for the right shot on a specific animal adds another element of difficulty to the hunt. It doesn’t always work out, in fact, it rarely works out. But the satisfaction that you get when it all comes together makes the hunt that much better. You have already refined your hunting skills to the point that you are being selective. You don’t kill for the sake of killing. Don’t beat yourself up over your failures, but instead, ask yourself what you can learn from your encounter. Remember this!!!! Even if you failed to get your target animal, YOU had an encounter/experience that no one else in the world had the privilege of enjoying. That is, in my opinion, what really makes the hunt special!

Comment by Kareen:  Thank you so much and you are so right! Now I don't feel so bad and you are especially right about my encounter/experience, it was pretty darn neat.

Every hunt whether deer or hog, the encounter/experience is true...that no one else in the world had the privilege of enjoying.  Wishing you GOODHUNTING on your next hog hunt, Kareen.