Cody says - This picture speaks more than Cory could ever describe at this moment. Taken when we first got up to the buck, and definitely my favorite picture. Built-up years of emotion coming out in this picture. No one works harder, is more persistent, and puts more time in than my brother does for these big public-land whitetails. I owe anything I know to him and my father. Yesterday was Cory's day! Congratulations! 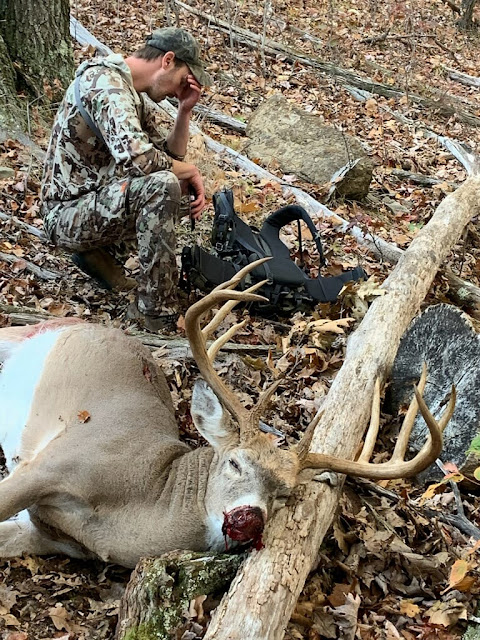 I would like to take a moment to personally thank the many that have reached out to me and congratulate me on the last few days. It has been certainly overwhelming, to say the least, and I thank every one of you for reaching out to me. I spent nearly all day yesterday trying to return texts and phone calls and simply have not had time to sit down and publicly thank everyone. I am not a social media person and I don’t spend much time on it. Needless to say, there are no words to describe the last few days. It has been 100 blessings and I still cannot believe I was given an opportunity at the old buck. Those that know me to know that I spend a great deal of time scouting, shed hunting, and searching for old bucks in mountainous regions here in Pennsylvania. It’s something that’s been a part of my life for quite a few years now. The area I live in Northern PA contains literally 1000’s of acres of public land and those that live here, including me, are blessed to have all these beautiful mountainous public land regions to explore. It is basically a “playground” for anyone interested in spending the time and energy to explore it. In all those years and in all the many old bucks I’ve come to know, I’ve never ever come across one of this caliber. He is truly a one in a million specimen and just having the opportunity to hunt him was an honor, let alone take his life. My buddy and I have been after this buck for 3 years now and I will share all details at a later time. Up until this past week, he was a complete ghost, moving only at night according to trail camera photos. I also have 2 years-worth of sheds from him. For whatever reason this past week, he decided to “let his guard down”, and that was his biggest mistake. I got several daytime evening photos of the buck feeding on acorns. I typically don’t hunt these old bucks early season as all my past success has come during the “rut” phases, but I decided I needed to hunt him. Like I said I will share all details of the hunt at a later time. The moments leading up to the shot were BY FAR the most intense moments of my life. There is absolutely nothing and I mean nothing that can prepare you for those moments. Somehow I held it together. I saw several comments regarding the recurve bow or “traditional” tackle. 8 years ago my life changed for the better when I discovered traditional archery. I cannot express here the joys that traditional archery has provided for me in the last 8 years. It has completely changed my life all for the better. The memories I’ve gained and the people I have met who have the same love for the bow and arrow and the flight of the arrow have enriched my life so greatly. If you are even somewhat interested in shooting a recurve or longbow, I highly encourage you to at least try it as I almost guarantee you will see what you have been missing. I have to thank my Dad who is the best hunter I know for all that he has taught me throughout my life. There is NO WAY any of this would have happened without his guidance throughout the years. I also have to thank my brother for his help over the years and also his help on the recovery of the buck. Having him there to recover the old buck made it even more special. Lastly, I have to thank my wife for all that she puts up with. She sacrifices more than I could ever express here. I’ve left her alone at home way more times than I should have while I attend archery tournaments or spend time in the mountains and never once has she ever complained. And I’d like to mention one last thing here…and that is that I was just the lucky hunter. The old buck is the one who deserves all the attention. I cannot even begin to imagine how these bucks live to the ages of 10 to 12 years old in the heavily hunted areas of Pennsylvania, I don’t think we fully understand what they go through to survive. Surviving the 2-week long rifled season being sought after by high powered rifles and the 6-week long archery season. Not only that but all the other “hardships” they deal with. Four-legged Predators seeking them from the first minute they exist, the cold and long winters they deal with trying to make it through in hopes to see the spring months and also the heat of summer and complete discomfort with 1000s’ of insects constantly pestering them. They are the ones who deserve ALL our respect and admiration for they are indeed one of the most magnificent creatures God has given us. Again, THANK YOU ALL for the wonderful comments the past few days! It certainly has been an unbelievable experience that I will never, ever forget.
My congratulations on your monster PA buck, Cory! Way to go and I'm so very proud of you!
Posted by Marian Ann Love at 7:30 PM

Wow, what an awesome post Marian. This is what deer hunting is all about. Respect for the animals. This guy get's it and it's refreshing. Great post!

Marian Ann Love
Vicksburg, MS, United States
I am 79 years young and live high on the bluffs of a historic civil war town of Vicksburg, MS. I was born and raised here and attended St. Francis Xavier Academy, graduating in the Class of 1959. I started my government career at the Vicksburg District, USACE. I retired from the U.S. Army Corps of Engineers, Waterways Experiment Station (now ERDC) with 25 years service in September '95. I'm a proud mother of 4 daughters, 6 granddaughters, 3 grandsons and 4 great-grandsons, I have been deer hunting for 35 years now and in the last 4 years killed two wild hogs during a hunt. I look forward to hunting season and also fishing in our great Mississippi outdoors!