A Vicksburg Native Following His Dreams 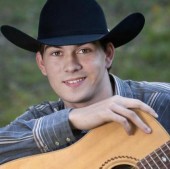 I have been a fan of William Michael Morgan for a long time and we are also friends on MySpace.  He hails from Vicksburg and I know his Grandmother very well and her Mother who has since passed on.  His Grandmother and I used to play together when we were little.  In fact, when he became my friend on my MySpace he said that his Grandmother had a picture in her home that was given to her by my Mother.  I can't remember now what it was of...but was happy that he shared that with me.

He has moved to Nashville to chase his country music dreams with two contracts in his pocket.  He has signed on with Warner Brothers Records Nashville and Warner Chappell Publishing Nashville.

He is the 19 years old son of Mike and Pam Morgan of Vicksburg and said he's been going through a bit of culture shock following his move.

"It's a change of atmosphere not having Mom and Dad around," Morgan said.  "But you have to grow up sometime."

Morgan said he has been busy writing songs in preparation for what he hopes is a long and fruitful career in Nashville.

He performed last Friday in Las Vegas in an event leading up the the 48th Annual Academy of Country Music Awards, which was broadcast on CBS last Sunday.

He performed with country music singers Easton Corbin and Charlie Worshan at the Orleans Hotel and Casino as part of The ACE Experience.

Singing since he we 11, Morgan has done everything locally from RiverFest on down, even opening for country music singer Gilbert Brantely in 2011 at the annual downtown festival his father said.

Morgan is a proud Vicksburg native and said he carries his love for the River City with him everywhere.

"People ask me where I am from and I tell them Vicksburg, Mississippi," Morgan said.  "I'm honored to be from Vicksburg.  You guys did a lot for me, supporting me and playing my songs on the radio."

Wishing my friend, William Michael Morgan, the BEST of LUCK in Nashville and hope he has a great career in the country music industry!

(Some info taken from The Vicksburg Posts)