MS River Back In Business 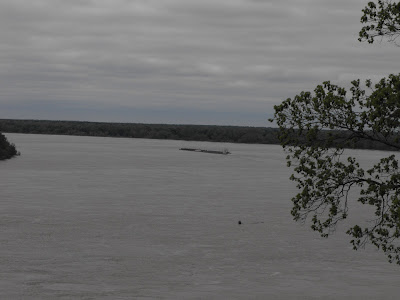 The river was closed for about 24 hours after one of 30 barges in a southbound tow hit the U.S. 80 bridge at Vicksburg about 11 a.m. Sunday morning.

Two of the barges ran aground, one carrying petroleum coke sank in about 80 feet of water about 1/4-mile south of the Interstate 20 bridge and 27 were corralled in a few hours.

It was reported that the 83-year-old at Pier 4 was hit and received only scratches.

The bridge over the Mississippi River has been hit about 70 times in the 40 years since the 1970's, but a third of those crashes have come in the past nine years.

Tomorrow the flood wall valves will be closed and a partial flood gate will be erected near Crawford Street.  The valves are closed to keep the rising Yazoo Diversion Canal, which is affected by the Mississippi, from flowing under the wall at City Front.  The river stood at 36.15 feet at the local gauge this morning .  A crest of 42 feet is predicted by May 6, a foot below flood stage, according to the National Weather Service Lower Mississippi River Forecast Center.  Once again, it's man against nature! 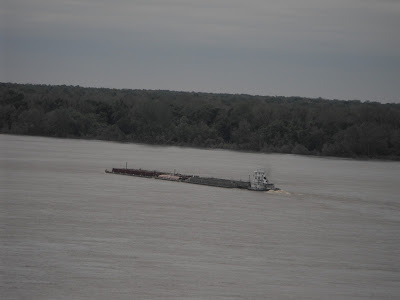 I did not get the name of this particular towboat this afternoon while on my way home.  It was headed north in the bend of the swollen MS River.
Posted by Marian Ann Love at 5:08 PM