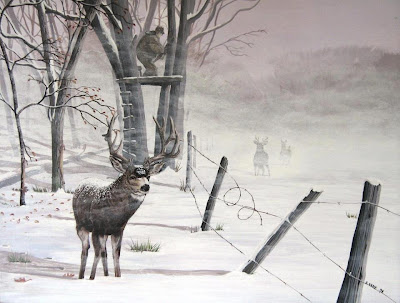 I saw this picture on Facebook and had to share it with you.  I can almost feel the blowing cold in the air and love the hunter up in the tree/deer stand.  Imagine having deer watching you and you look down and see an awesome buck like that! I have been there at one time when I had about five does starring me down while a big buck was in the area at Brown's Point on Kings Point Island.  At the time I did not know that I could aim for the neck and that was the only shot I had.  It may have been a 15 pointer.  It was huge.  Never will I forget that day as long as I live and what if I had made that one shot!  Since then I have put several deer down with one shot to the neck and dropped them in their tracks!

Born in the wrong Century said...

I love that picture, it would look nice hanging in my living room.

I love it too Rick! Thanks for coming by and will come over and see you soon! Have a great week! :)