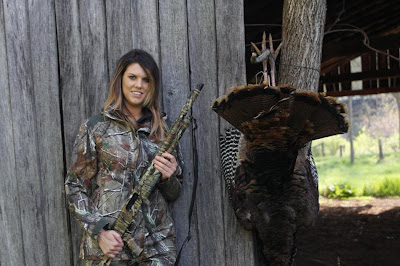 Stephanie and her husband Jason went out turkey hunting this morning with Chuck of Open Season TV and used Josh Schmeltz "Strutting Tom" and it worked like it was supposed to, he said.  Four Jake's were called in right to the "Strutting Tom" that he made for him and once again it worked perfect. Stephanie leveled this big Jake at 35 yards.  The bird weighed 22 lbs. and had a 6.45 beard & 2.5 beard but the spurs were like a Jake.  He said that was so weird.

My congrats to Stephanie on her very first turkey in our great wild outdoors!