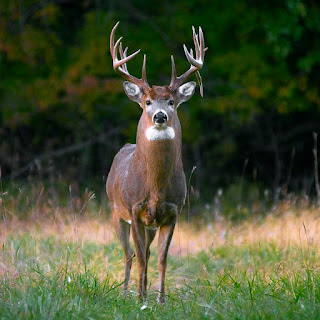 Tests on deer carcasses collected in Mississippi don't show any signs of the fatal infectious disease that was recently confirmed in a dead buck.
Investigators still don't know where the 4½-year-old buck contracted a chronic wasting disease, Russ Walsh, executive director for wildlife in Mississippi's Department of Wildlife, Fisheries, and Parks said in a video posted Tuesday on the department's website.
He said genetic tests show the buck found Jan. 25 was local and therefore was infected by a local source. Testing is continuing on other deer reported sick or dead, including roadkill, he said.
The tests on 64 deer found sick or dead within 5 miles (8 kilometers) of the buck came back Monday, he said.
"We've sent off multiple other samples," he said.
To avert or delay the infection's spread across state lines, Louisiana has banned supplemental deer feeding in East Carroll, Madison and Tensas parishes — those nearest to Issaquena County, where the buck was found about 5 miles (8 kilometers) from the state line.
Hunters in those parishes cannot bait feral hog traps with rice bran, non-fermented or whole cracked corn, soybeans, protein pellets and commercial feeds formulated for deer because of the ban, which took effect Monday. They can still use bait not normally eaten by deer, according to a news release emailed Tuesday.
Alabama forbids importation of deer carcasses from any of the 25 states where the disease has been confirmed. Hunters can still bring in deboned meat, tanned hides, and cleaned skulls with antlers and teeth.
The neurological disease typically causes deer, elk, and moose to have tremors and other movement problems and lose weight. It is part of a group of diseases known as transmissible spongiform encephalopathies and is similar to bovine spongiform encephalopathy — mad cow disease — in cattle and scrapie in sheep.
The disease was already present among deer in Arkansas and 23 other states.
Mississippi banned the import of dead deer carcasses from affected areas last year in hopes of keeping out the disease.
It banned supplemental feeding in Claiborne, Hinds, Issaquena, Sharkey, Warren and Yazoo counties after the disease was confirmed.

Note:  The Mississippi Department of Wildlife, Fisheries, and Parks will host a chronic wasting disease public hearing in Vicksburg at the Vicksburg Convention Center at 6:30 on Monday, March 19, 2018.  Will discuss MS CWD Response Plan.  Biologist and Law Enforcement officials will be available to answer questions.
Posted by Marian Ann Love at 4:07 PM