I read in The Vicksburg Post that the camels were coming to town but disappointed that I did not make it to our Vicksburg National Military Park to see them.  You don't see a camel everyday!  These pictures were taken from the Post and it shows Doug Baum fixing Richard's bell before talking to the writers.  The other camel's name was Ibraham.  I did not know that camels were used in the Civil War.  Baum  presented a history program on the use of camels.  "This was 1856, pre-Civil War," he said.  "Jefferson Davis was secretary of war for the Union at the time and under his tenure, money was appropriated for this plan that had been brewing for about 20 years.  They sent a ship over to the Middle East and North Africa.  It made two trips and brought 75 camels back.  The camels were off-loaded on the coast of Texas.  The Confederates used them for transportation.  There was no camel-back charges during the Civil War." Richard portrayed Old Douglas, the only camel to have seen battle action during the Civil War, Baum said.  The animal was shot down by a Union sharp shooter.  A grave marker was erected for him at the Cedar Hill Cemetery. 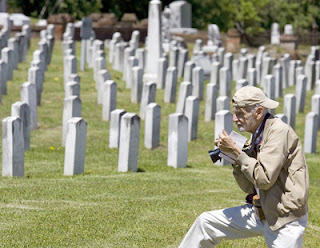 Ignor Lobanov of Mature Life Features in San Diego takes a picture of a grave marker at Soldier's Rest at the Cedar Hill Cemetery Tuesday.  Source: Bryant Hawkins-The Vicksburg Post
It was great weather here in Vicksburg to welcome 32 travel writers to see what Vicksburg was all about.  From the looks of it they were all pleasantly surprised. "Vicksburg seems almost raw, almost fledgling," said Karen Rubin, New York-based writer for the Travel Features Syndicate.  "You have so much that's genuine. I see the restoration and the preservation and that's so important.  You have such a good core of people who respect that about your history."  While here in Mississippi the writers visited the Town of Port Gibson, including Windsor in Claiborne County, the Town of Raymond and of course, Vicksburg, The Key to the South!
At least one of the writers felt the trip was not long enough, but said she would return.  "There is more history in this little area than any other," George Bruzenak said,.  "One of the things we'll bring out is how important the (Union) victory in Vicksburg was to the ending of the Civil War.  There's ton of history here."
Posted by Marian Ann Love at 10:21 AM