Today we drove by the Mississippi Welcome Center to see that only half of the bean barge had been cut away since last Wednesday and had dropped 30 feet below the water. (Also, see Thursday, April 7, post).  Over the weekend a cable on the crane supporting a chisel used to cut the barge snapped and delayed a lift-and-cut operation originally planned to end last Friday. 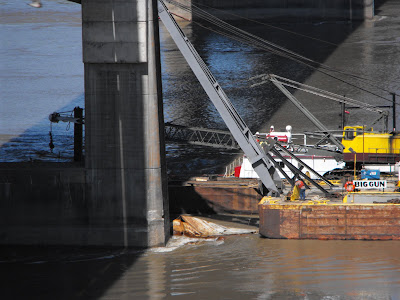 Part of the barge still up against the I-20 bridge pier. 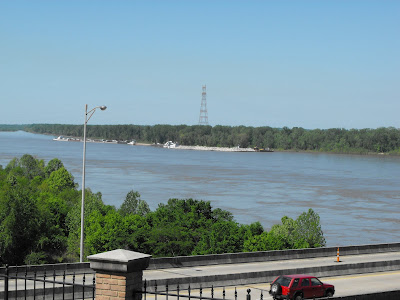 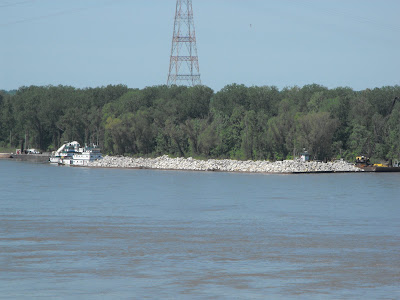 A barge loaded with rocks is stationed along the Louisiana bank.  The Louisiana Department of Transportation & Development contracted with multistate contractor Luhr Bros. Inc. for $750,000 to fill a depression believed to have become deeper due to currents swirling off the barge with 2-ton boulders.  Tugs owned by Marquette Transportation spent much of the first week after the incident trying to push it off the pier, but were called off when too much vibration on the bridge was detected by stability sensors.  Traffic on I-20 has remained open, though restricted in the eastbound lane. 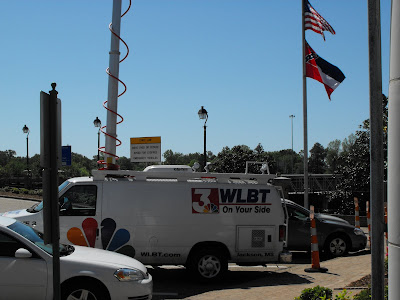 TV Station, WLBT Channel 3, of Jackson, MS, reporting the news on the barge against the I-20 pier span.
Posted by Marian Ann Love at 3:31 PM